Bluetooth on Linux has always been a headache for me. As I expected connecting HC-05 module to my laptop wasn't any better. In this note I want to describe how to configure and connect HC-05 Bluetooth module to the Linux PC.

Playing with these cheap (about 3$) Bluetooth modules I wrote a small application which can help to diagnose and configure them. In this article I use Arduino Nano (atmega328p) and classical HC-05 with a linear power regulator. There is no need to solder anything complicated - only one little wire 😀. 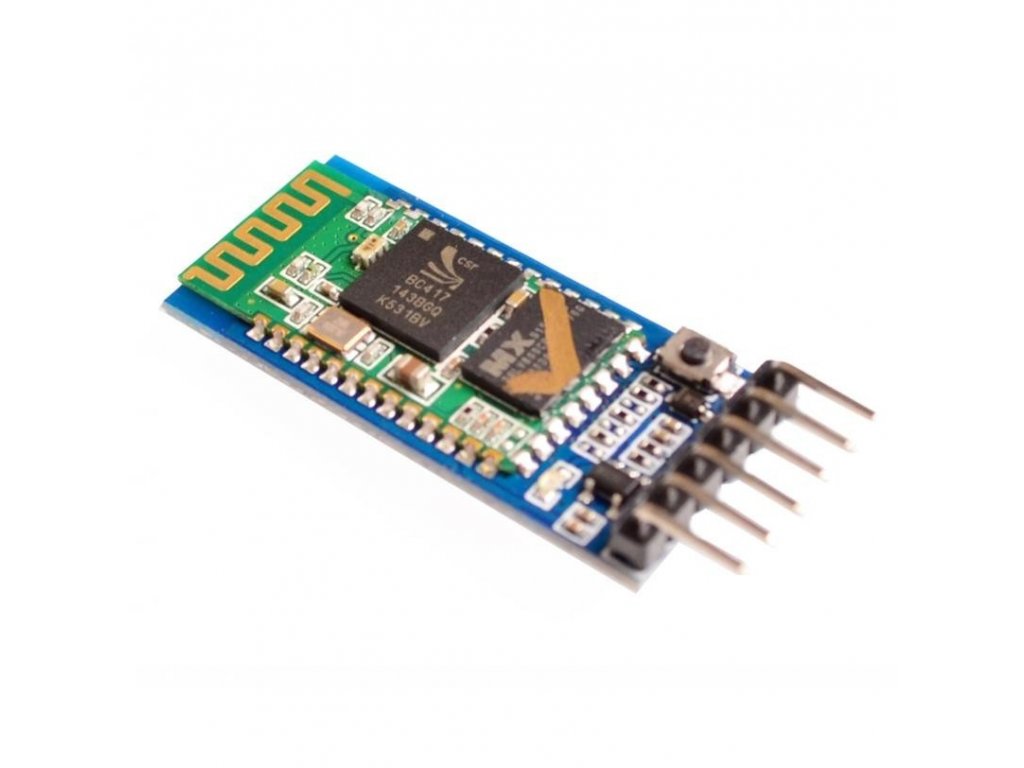 Image is taken from www.laskarduino.cz

Firstly, let me describe this Arduino app. I can't say that it is reliable but it is simpler than doing everything by hand.

This application can be used on most of the Arduinos starting from Arduino Nano. You can download it from the Github. I used platformio as a development environment so if you are familiar with it you know what to do (look into platformio.ini). If not, you can use classical Arduino IDE. To do so, you need to:

The application provides "shell"-like interface to work with HC-05 module. It has following commands/features:

To use it firstly you need to connect your Arduino and HC-05 module together.

Hardware Setup. The Arduino will need to control power to the HC-05 module and be able to set HIGH/LOW state on the pin 34 (or PIO11). This is required due to the way HC-05 is switched to AT mode. Firstly, Arduino powers off the module then it sets pin 34 into HIGH state and turns power on. After this HC-05 boot into AT mode. 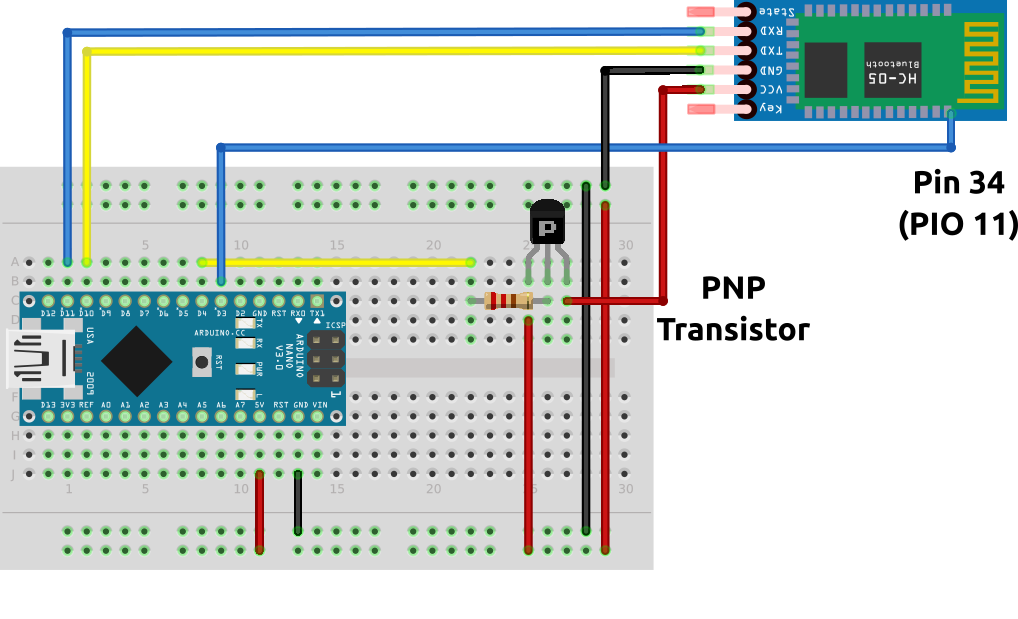 The transistor can be any PNP transistor from your Arduino kit. Make sure that it is PNP by googling its datasheet. I used 2N3906. The resistor also can vary. It is needed to limit current going through the base of the transistor. I picked 1000 Ohm one. I suppose that anything around 500 - 1500 Ohm would work.

Let's try this out! Connect Arduino and HC-05 as shown in the schematics above and flash the application to the Arduino (with platformio or Arduino IDE). Then open serial monitor. You should see something like this:

By default application assumes that module has baudrate set to 38400 (the default baudrate in AT mode). If you changed it previously then change it in the application as well and re-upload it.

Type help into the application shell to see all the available commands.

So, after you set name for your module and configure it as a slave you can try to setup wireless connection. Install Bluetooth stack:

Next, lets check if kernel module is installed and loaded. For some chips it will be enough to have btusb loaded but for other chips (like my Broadcom) you will need to find and install appropriate driver. You can check if btusb is loaded into the kernel by the following command:

Note: In case you also have Broadcom chip I would recommend to look into this instruction. It seems to be a common solution.

If there is nothing in the output you should try to install general Bluetooth driver:

If it won't work try to find driver for your particular device. You can find out some information about name of your Bluetooth chip with following commands:

After driver is installed and kernel module is loaded start and enable Bluetooth service:

Note: There should be - Active: active (running)

Now, after you install the driver reset your PC/laptop. It really has to be power reset (power off -> power on) because during reboot your drivers could still stay unloaded (you know just in case). After boot check output of dmesg it should be something similar to this:

Pairing with the device

First of all, I always try to connect to the HC-05 with Android phone. I used Serial Bluetooth Terminal to connect and send some text to the module to check that it's alive. It is always a good sign that everything going well. So, in case you have one try that. Anyway, in the linux run bluetoothctl:

Make power reset of the HC-05 module and then turn on Bluetooth scan of nearby devices on your PC:

The exact MAC address of the HC-05 can be obtained by the AT+ADDR? command in the atmode. See application above👌.

After something like HC-05 (00:13:EF:00:03:04 in my case) has appeared on the screen you will need to make it trustworthy, pair it with your PC and try to connect to it. That can be done by the following commands trust <MAC>, pair <MAC> and connect <MAC> accordingly.

The last step is to create serial port. The following command binds your Bluetooth device with rfcomm device (/dev/rmcomm0 in this case). It won't immediately connect to your HC-05 only when an application such as serial monitor will use it. More about RFCOMM protocol and devices.

Unfortunately, on some systems (e.g. Arch linux) rfcomm utility can be in status "deprecated" and won't be available in the official repository. Try to find instruction of how to install it on your particular system (See Arch Wiki).

Now you should have serial port /dev/rmcomm0 which is attached to your Bluetooth device.

Let's test that it works. In another terminal open serial monitor attached to Arduino with HCTOOLS application and run echo command:

Try to open serial monitor on the rfcomm port and send something to the device: 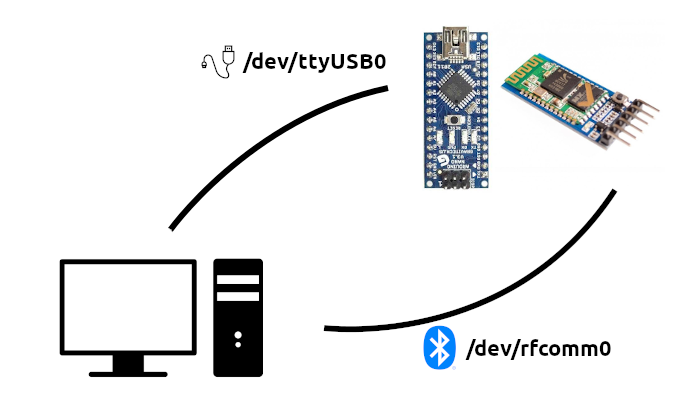 That basically it. For convenience you can add a udev rule to have a nice name for your device instead of /dev/rfcomm0. The name is specified in the SYMLINK attribute. For example:

As you can see there is attributes of particular device. These attributes can be found with following command:

Now your device should be available under /dev/blueled path.

There is list of problems which I faced during my attempts to configure everything right.

Hey👋 I'm Andrey. I have a quite wide range of experience from hardware debugging and kernel development to web scrapping. During the day I work as a Software Engineer on Linux filesystems. In this blog I post my personal short tutorials or intresting technical notes. I love open source and use mainly free software. Btw I use Arch. Feel free to ping me here:

For comments, please send me an email or contact me on Telegram.

Or create pull request with improvements